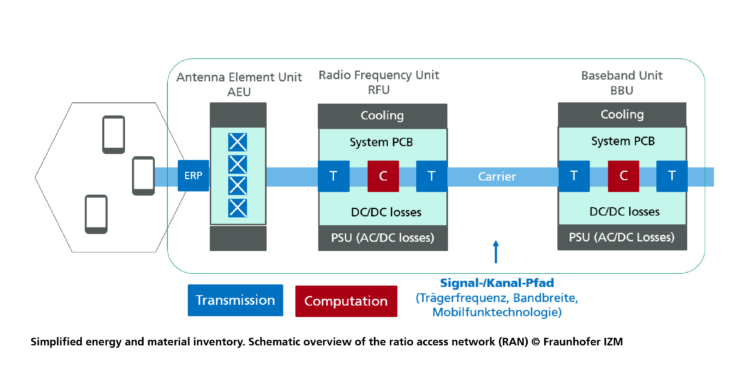 We use our smartphones on average for almost four hours a day, for social networking, streaming, gaming, and a host of other functions. We all know that the phones in our hands consume energy – but how much power is actually consumed by the mobile network and its countless transceiver stations, permanently sending and receiving data? Lutz Stobbe leads the UTAMO project, which is addressing precisely this question. In his interview with RealIZM, he speaks about the project and why this is becoming an increasingly important topic right now.

RealIZM: Can you tell us the backstory of your project?

Lutz Stobbe: Generally speaking, there is growing interest in how much electricity and resources our internet and telecommunication networks are consuming. As environmental politics are becoming increasingly important, people are asking more questions. They want to know the amount of resources we are using for telecommunication. How will this consumption change in the future? How much more power will 5G or even 6G consume? On what scale will raw materials be consumed and might we be facing real scarcity at some point?

Lutz Stobbe: Many network operators and platforms (such as Google or Amazon) indeed measure their energy consumption, but they don’t publish this data. Basically, most companies have an interest in understanding where power is consumed and how that will develop in the future. At the same time, however, they want this data to be kept as confidential as possible.

RealIZM: So how do you get the data?

Lutz Stobbe: The UTAMO project is about assessing the environmental impact of mobile communication in Germany. We cannot just go to mobile phone providers and ask them for their power bill. Instead, we have to create an inventory model and extrapolate the power consumption based on available technical and commercial data. We have two soruces to get data about the existing mobile networks in Germany. The Federal Network Agency (BNetzA) has given us the opportunity to use anonymized data from the antenna site database, which lets us statistically map the antenna and channel configuration for typical base station locations. But there are a lot of gaps with data concerning the equipment still missing.

Lutz Stobbe: …that we have to try to reproduce corresponding data and parameters from equipment data sheets, whitepapers, and even theoretical assumptions based on standardization documents. That is the real effort involved in our work. You have to understand this entire technical system very well, including all the many factors and parameters that affect energy demand and how the technology is developing in the process.

RealIZM: Where did you go from there?

Lutz Stobbe: We developed three models: The first includes the distribution of sites and their configuration. The second model descripts the radio access network (RAN) for the individual technologies at these sites. And the third model maps the transport and core network (TCN). In our network models, we distinguished between energy consumption in actual use and material consumption related to the manufacturing of the network equipment. This approach allows for a simplified life cycle assessment for the hardware present at the sites. In other words, we examined how many circuit boards, chips, housing, etc. is required to build an antenna system or base station.

RealIZM: Will this lead to valid results?

Lutz Stobbe: In the end, we can verify our calculations somewhat because we already have a sense for the approximate scale we are talking about. The telecommunications operators publish annual reports with some environmentally relevant data, or you find some figures now and then in press releases. We are collecting this on a permanent basis, and we are also in constant contact with the companies, so that we can identify and bolster our models with current data.

RealIZM: How is this project related to antennas?

Lutz Stobbe: The project is about the large base stations you sometimes see alongside roads or on roofs. These devices are often in use for a long time and there are not so very many of them. To put this into perspective: in Germany, there were about 70 million active smartphones last year and only 82,000 antenna sites with 360,000 antenna systems. These systems nevertheless consume enormous amounts of energy. While the short life expectancy and poor recycling of smaller devices are often the problem in environmental terms, for antenna systems, it is energy consumption.

RealIZM: How can this be reduced?

Lutz Stobbe: We have developed the so-called 5C method as a checklist to identify potential improvements in terms of energy and material. These five Cs are: condition, capacity, configuration, components, and control.

Condition means the boundary condition of the radio cell. It is about available frequencies, the size of the RF cell, and the location. This is important, because the presence of buildings can attenuate radio waves and, if there is a lot of damping, more energy must be used to achieve a certain range.

Capacity describes data rates, functional utility, and usage patterns. Again, this is partly dependent on the location. Data usage in a suburb is different from that in a city. This results in different load profiles that we capture.

Configuration determines which radio system is used and is, so to speak, the architecture of the entire system. Frequency profiles, bandwidths, and technology generations play a major role here. Performance can be gained simply by using different technology standards, and this can have some effect on energy consumption. However, configuration also involves deciding whether the base station should be built directly on the radio system or further out in the field, for example.

Components are the most important point and include amplifiers, converters, antennas, connectors, processors, etc. The basis for our environmental assessment is the combination of the technical component data and the configuration.

Control means load and energy management during operation. Signals can be rerouted, or nodes can be switched off.

RealIZM: Who can take advantage of this method at the end of the day?

Lutz Stobbe: For policy measures, the big picture is usually more interesting. Individual companies, on the other hand, always want to understand the exact crux of the matter, so that they can address it in detail. With our models, we are right in the middle of it. We have a top-down view of the entire problem, but we can even look at individual components through different layers in the model. Whether it is an antenna system, a computer unit, or a consumer device – similar structures show up again and again in electronics, which is why our model approach makes sense from the micro to the meta-level.

RealIZM: Where does the consumer come in?

Lutz Stobbe: The consumer is, of course, the linchpin, because he or she is ultimately the user of the data. The idea is to determine demand more precisely by studying usage patterns in detail. If we see that, at a certain time of the day, there are hardly any phone calls at a certain location, then certain systems could be switched off by the control side I mentioned. As soon as demand increases again, they are switched on again, of course. It’s not about taking something away from the consumer or turning everything down as far as possible, but about load adaptation.

RealIZM: What is preventing companies and network operators from optimizing things and taking action right now?

Lutz Stobbe: An antenna site, including a base station and radio and antenna units, is a very large investment, and this investment will only amortize after a long time through savings in operating costs. As an example, with our network model, we can calculate the energy tradeoff between higher numbers of antenna sites versus smaller cell sizes (which reduces the amount of emitted radio power). The fact that a good balance of antenna sites and cell size not only saves money, but also makes sense from an environmental and sustainability point of view must first become established in people’s minds and business models.

In addition, there is also a lot of politics involved in this topic. This is not a purely technical topic, even though we try to contribute facts to the issue through very precise technical analyses.