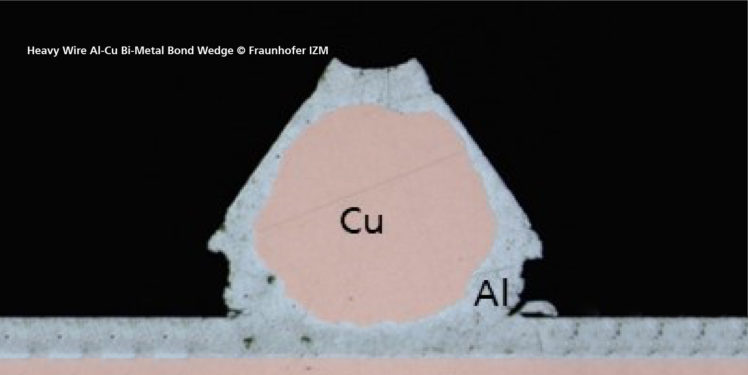 With more than half a century of history behind the technology, progress in wire bonding shows no signs of slowing down. For proof of the technology’s unbroken potential, look no further than the AlCuBo project (Al Cu bonding wires for power electronic modules). Run by Fraunhofer IZM and its partners (the Extrusion Research and Development Center of the TU Berlin, Hesse GmbH, Vitesco Technologies), the project is developing processes for scaling up the production of AlCu composite wires for power electronics to mass production readiness by extrusion and wire drawing, and characterising the resulting mechanical and electrical properties. After successful completion of the research, the project’s results will be put to work in a demonstrator system for the automotive sector. RealIZM chats to project leader Martin Schneider-Ramelow about the project.

RealIZM: How did you come up with the idea for this project?

Martin Schneider-Ramelow: I come from a background of materials science, especially wire bonding technology, here at Fraunhofer IZM. From my work with the Extrusion Research and Development Center of TU Berlin (our partner for this research project), I discovered that the smallest metallic wires they are able to produce by extrusion are only 500 micrometres small. This corresponds exactly to the largest size that we use for heavy wire bonding for power electronics. This process is used in over 90% of power electronics modules.

The idea is now to develop new material compositions for heavy wire interconnections, so that we can build more reliable power modules that last longer. There are relatively few companies in the world that manufacture these wires. In Europe, there is practically only one manufacturer – Heraeus. With that in mind, we tested bi-metal wires from this company, and they are suitable for wire bonding, in principle. However, because of the relatively thin Al sheath, many semiconductor chips failed during the bonding process. So, now we want to optimize the thickness of that AI sheath with the help of our colleagues at the Extrusion R&D Center. These composites will be tested and systematically analysed here at the Institute. Our hope is that we can use them to build new types of highly reliable power modules.

RealIZM: The technology itself has been around for quite a long time. Why is it still relevant for us?

Martin Schneider-Ramelow: Wire bonding technology was invented back in the late 1950s and refined in the 1960s. As a technology, wire bonding is very versatile. Fully automatic wire bonders can be programmed so that almost any geometry on the surface can be accurately contacted. By comparison, if you look at our embedding technology, you have to use a laser in order to get to the contact points. This becomes particularly difficult when working on large areas, but this difficulty does not exist with wire bonding. That is what makes the technology so flexible and so cost-efficient. Not to forget, it is also very fast, as you can get 2 or 3 heavy wire loops every second.

RealIZM: Why are you looking to new materials for the technology’s future?

Martin Schneider-Ramelow: Theback sides of semiconductors are no longer soldered, but made with high-quality sintered bonds. In the past, this was their weak spot, as the soldering points tended to break. Once we started sintering (which we also do here at Fraunhofer IZM), the thick wire bonds at the top became the weak spot. With the usual 99.99% high-purity aluminum wires, symptoms of fatigue set in relatively quickly. Specifically, fatigue cracks can occur when thermal and mechanical stresses alternate. Ultimately, you get lift-off and an electrical failure of the whole module.

RealIZM: What can you do to avoid that?

Martin Schneider-Ramelow: The idea is to achieve higher strengths with new aluminum-copper wires. With the previous alternatives made of copper, however, we only achieved very low yields so far (i.e. a small yield of functioning chips). The forces strengths were simply too great, and many chips already broken (because of cratering) during production. That is why no alternative materials have yet been used in industrial production. In our project, we now want to adjust the thickness of the aluminum to that sweet spot, at which chips will not fail by cratering and we get closer to the best case scenario of a 100% yield. On the other hand, the copper cross-section should, of course, remain as large as possible, because copper has better electrical and thermal conductivity and also higher strength. In short, the aim of the project is: Optimizing such a material composition for power modules.

RealIZM: So you could say that copper is the top dog in this material mix?

Martin Schneider-Ramelow: Copper is more important in the sense that it has better electrical and thermal conductivity and higher strength. However, with pure copper – i.e. if the wire were a full copper wire – there would be the risk that the semiconductors under the very thin aluminum layer (3-5 microns) could be damaged during the bonding process (cratering). We would be back to power modules failing. Aluminum is important, because it is relatively soft and can serve as a weld or a contact partner. To be more precise, the aluminum layer around the wire is connected to the aluminum layer that can be found on the surface of nearly every power semiconductor. In sum, one can say: Aluminum is important for welding, and copper for its electrical, thermal, and mechanical properties.

RealIZM: Are there any other materials that could be used for these purposes, e.g. gold or silver?

Martin Schneider-Ramelow: Gold and silver are also used in wire bonding, but not for thick wires because of costs. The distinction between standard and heavy wire is very important. Power semiconductors are bonded exclusively with heavy wires in wedge-to-wedge technology because of the high currents needed for these chips. Thick wires have a diameter between 100 and 500 micrometers. Standard wires are typically thinner than 50 micrometers, and they are typically bonded with so-called ball-wedge bonding. The smallest diameters are less than 15 micrometers in thickness. 20 years ago, these were made almost exclusively from gold, but we switched to copper and silver in the past decade – again, simply for cost reasons.

RealIZM: Could you tell us more about the project’s goals and how the responsibilities are shared?

Martin Schneider-Ramelow: At the Extrusion R&D Center of TU Berlin, composite wires are produced first by extrusion and, afterwards, by drawing. The bonding wires have a diameter of approx. 0.5 mm and consist of an Al sheath around a Cu core. The suitable forming conditions are determined by numerical process simulation. The results are validated by comparing them to observations from real-life forming tests.

At Fraunhofer IZM, the mechanical properties of the bonding wires are characterized by tensile tests and hardness tests (micro/nanointended). We can also determine their current carrying capacity can and compare them to other commercially available materials. The optimum thickness of the aluminium cladding is determined, focusing on the bond yield on semiconductor material without cratering (with a goal of 100% yield due to thicker Al cladding) and on a high current carrying capacity achieved with the largest possible Cu core.

We are using a demonstrator setup for industrial wire bonding equipment with our industry partners Hesse GmbH and Vitesco Technologies GmbH to carry out bond tests and introduce the necessary adjustments to the equipment or tool geometries. Finally, temperature cycling and mechanical stress tests are conducted as part of our reliability and lifetime evaluations.

RealIZM: What will come of the results of this project?

Martin Schneider-Ramelow: From a scientific point of view, the analyses of the extrusion and wire drawing process chain could initiate a further process chain and improve material properties. With our mechanical and thermo-mechanical investigations, we can see new bimetallic combinations coming for bonding wires, which could keep up with the new requirements of the power modules of the future, e.g. working at higher temperatures. The insights gained from this project will be an important basis for the production and processing of Al/Cu bonding wires.

RealIZM: What about the commercial point of view?

Martin Schneider-Ramelow: The Al/Cu-compound wires we are working on are meant for the assembly and connection of power electronic modules. Power electronics are used, for example, as voltage converters that transform the DC power generated from wind or solar energy into the AC power that can be fed into our power grid. Power electronic modules can make an important contribution to our attempts to reduce our carbon footprint, with loss-free conversion promising lower energy consumption. The same applies to voltage converters in the field of electric mobility. For today’s and tomorrows electric cars to have all the functions we expect, like autonomous driving, we need to save weight, increase performance, and/or scale down their components.

RealIZM: What’s the future of wire bonding? Will it still be relevant in 15 years?

Martin Schneider-Ramelow: I can tell you an anecdote about that: When I started working here at Fraunhofer IZM 22 years ago, the head and founder of the Institute at the time, Professor Reichl, told Professor Lang, his eventual successor and, back then, head of the wire bonding group, that he should start to look for a new research interest, because wire bonding would soon be dead in the water. And yet today – to give you a roughly estimate – over 75% of microelectronic products are wire-bonded, exactly because it is such a flexible and low-cost technology. I assume that wire bonding technology will continue to stay relevant going forward. Wire bonding will make significant progress with thinner standard wires, supported by a greater choice of different and high-precision machines. Innovations are already happening, especially in the field of flip chip bonding, chiplets, or embedding technologies. But all of this will need time.