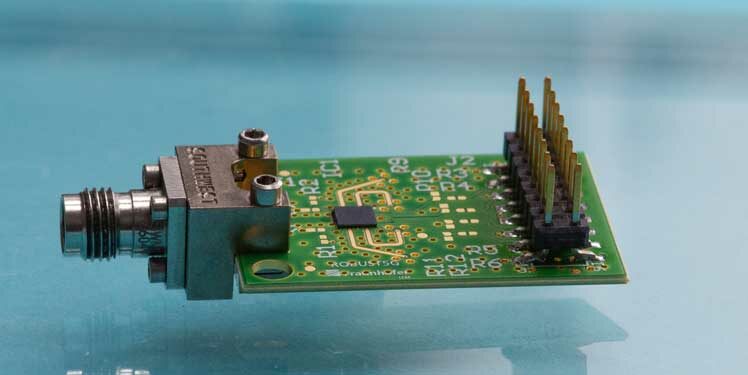 Communication networks like 5G need the many modules and components that make them up to be robust and long-lasting, whatever the environmental conditions or other circumstances may be. Researchers at Fraunhofer IZM have now developed a testing method which allows them to make precise predictions about how the materials used for these modules age.

These aging processes, and the electromagnetic properties of these materials, had previously not received much attention in research. But with the testing strategy found in the Robust5G project, key decisions can now be made very early on in design processes.

RealIZM spoke to Olaf Wittler and Michael Kaiser about their project, the hurdles they had to overcome, and the optimizations they introduced for this field.

RealIZM: An easy question to start with: How would you explain the Robust5G project to your grandma?

Michael Kaiser: That’s maybe not as easy to answer as you would imagine.

We want to be able to make a concrete statement about whether a product is designed robust enough in terms of, for example, aging. The question is: Will it last 5 years or even 10 years, or is it a throwaway product and not usable after half a year?

The idea behind Robust5G is to examine the materials used for the integration platform with the printed circuit boards it relies on. In the project, we compared test structures to analyze the impact that aging has after a specific time, or after a certain number of cycles.

We were investigating the changes between each step, and how severe the effects were. In addition, we looked for strategies to compensate for such possible changes to achieve the most robust design.

RealIZM: The materials you are talking about are materials for 5G modules, right?

Olaf Wittler: Yes, exactly. We wanted to use new materials and, going forward, we would like to know how these materials behave in the long run. Furthermore, we are not only interested in whether a material ages, but specifically what effect this has. In the tests, we observed the effects on the materials’ electrical and mechanical behavior, for example.

RealIZM: You are already speaking about the future. Has the Robust5G project finished already?

Olaf Wittler: We started working on the project in January 2021. Now, the project is as good as finished. We’ll have one more workshop, and then we’re done.

We want to present our results to potential industry partners and then speak to them about the possible applications that exist for our research.

RealIZM: Can you explain the technology behind your test procedure?

Michal Kaiser: In essence, we looked in detail at two basic issues relating to robust designs.

Olaf Wittler: First, we carry out a thermomechanical analysis, in which we age things thermally and then look at what effects this has mechanically. Looking at different materials that behave differently when expanding due to changes in the temperature, we found out that this has a specific effect on the final result.

Michael Kaiser: Second, we focused on the electromagnetic behavior of these materials. A change there has an influence on e.g., an antenna’s performance or on the general performance of high frequency routings, and by implication on signal integrity.

The questions we were trying to answer were: What happens exactly? To which extent does aging affect electromagnetic properties? Will only the losses increase, or would the relative permittivity vary, which could cause e.g., a shift in the resonant frequency of the antenna?

RealIZM: And how exactly is a test like this executed?

Olaf Wittler: We only had one year for the project, but the products we were investigating should last many years in the field. This is why we had to accelerate the aging of the materials under investigation. The faster test plan then called for us to expose them to higher temperatures in the lab in such a way that we could derive a meaningful service life model at the end.

More specifically, we mainly adjusted the constants, so that we could make a prediction looking ahead into the future for the robust designs. We were able to extrapolate from a model what would happen at a lower temperature over a longer period of time. For this procedure, we had material samples made and then examined these samples using a variety of means (electrical and mechanical).

RealIZM: Okay, so you’re simulating under laboratory conditions what could happen in the field. When I think of the areas of application, where would I notice improvements in my everyday life based on the optimizations you suggested after the tests?

Olaf Wittler: Actually, we don’t want you to notice anything as an end user. We want the radio technology you use to be so reliable that it fades into the background. So the end user will have less trouble or need to replace broken electronics.

Michael Kaiser: It should also be noted that material aging has a much greater impact on transmission with millimeter waves, which only really come into the picture for the first time with 5G. Whether such data rates will be available on our smartphones and whether that is actually necessary might be up for debate at the moment.

For industry applications, however, 5G mm wave will allow a lot of new use cases. And on top of that, the environment in industry also tends to be harsher, and systems should last longer. So, our results can be included for the design for such applications.

Our investigations were designed not only for the 5G millimeter wave. The principles that we investigated here can be applied to a wide range of applications. That could include autonomous driving or medical technology. They could also apply to gaming, augmented reality, and so on.

RealIZM: In the Robust5G project, you not only wanted to look at the actual aging of the materials, but also discover potential optimizations. What were you able to achieve in this area?

Olaf Wittler: In our investigations, we identified optimization potential in the sense that the right layout can prevent oxygen from diffusing into a circuit board. And oxygen in particular leads to aging. So, if diffusion can be prevented, aging can also be delayed.

Michael Kaiser: In addition, we can choose the design in such a way that it can compensate changes in electrical properties. This works, for example, by specifying a wider bandwidth design from the beginning. This way, we can guarantee that, even though the frequency might drift, it will still remain in the relevant transmission range.

RealIZM: That means that, in future, you will be able to adapt what you discovered to specific applications and specify a service life for real-life systems. That sounds exciting.

Speaking of optimization: Were there any obstacles in the project that you were able to learn something from?

Michael Kaiser: At the beginning of the project, we compared different materials to see how they fit our goals. Then, there was the problem of procurement. It was also a question of fabrication, since many PCB manufacturers do not even consider our reference material in their production lines. We eventually had to go for another material after all. People are probably generally aware of the bottlenecks in terms of availability at the moment.

Olaf Wittler: I also remember the point when we finally had results from the project, but they were not what we expected. Due to that, we had to reinterpret them and come up with other model approaches. That took some time, but finally the effort paid off. One of our colleagues used some of the results and won an outstanding paper award at a conference.

RealIZM: The different results were a bit of a surprise then, but probably not unusual for a research project, right?

Olaf Wittler: That’s true, of course. A certain amount of caution always goes a long way as to whether the data in the reference paper we were recommended would apply to our materials. But that’s what makes it so exciting. Of course, we also planned for the fact that a project like this does not proceed in a linear fashion. All results always have to be interpreted.

RealIZM: And what exactly are your results?

Michael Kaiser: I can sum it up for the electromagnetic analysis: For example, we detected this drift, that is, fluctuation, in the electrical properties. It is also interesting that the losses in the material do not have a strong effect and actually remain constant.

In general, the dielectric constant is an important parameter for designing components like antennas. The goal is always to have pretty accurate values for this. A deviation in the dielectric constant would result in radiation at a different frequency, which might downgrade characteristics of the wireless transmission of the data. This effect could lead to a complete loss of the wireless link.

RealIZM: You mentioned a workshop at which you want to present your results to potential partners. What exactly will happen at this workshop?

Olaf Wittler: For example, we will give representatives from industry an insight into this technology. That is, what to look for when building such a long-life antenna, or also how aging can be considered by the printed circuit board without having to have a try-and-error process.

What’s special is that, through the Robust5G project, we now have data that makes it possible to make decisions very early in the design, rather than later when everything has already been built. It is important that service life is considered at an early stage and designed into the product, because rebuilding things later would cause enormous costs. So, the earlier such decisions can be made, the better the development of such long-lasting products and the earlier they can be brought to market.

This interview was conducted and edited by Jacqueline Kamp.

This could be also interesting for you: