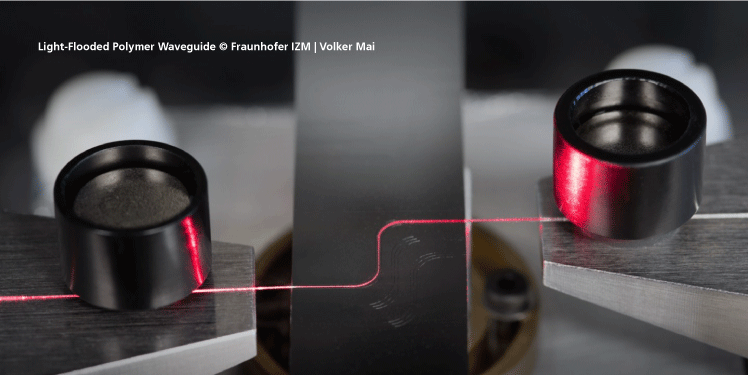 With IT evolving at historically unprecedented rates and taking over every aspect of our lives, data centres are getting bigger, more powerful, and more ubiquitous by the day. Crucial telecommunication infrastructure keeps their bits and pieces connected and working perfectly on the inside and connects them to each other and to the end users out in the field. Much of that infrastructure is now turning to photonics as the only way to achieve the incredible amounts of data and record speeds at which they operate, with low latency, high bandwidths, and extreme integration density. Dr Tolga Tekin, a researcher at Fraunhofer IZM, speaks about the photonics technologies for data centres and how to accelerate the speed of video streaming and digital marketplace services.

RealIZM: What makes photonics so important for data centres?

Tolga Tekin: In the last decades, we have seen a handful of enterprises growing from virtually nothing into real behemoths in the field of information technology: just think of the Big Five (Alphabet, Amazon, Facebook, Apple, and Microsoft). They primarily offer online services, all of which require big data. The total amount of data will keep increasing exponentially over the coming years and will eventually reach hundreds of zettabytes. For this reason, huge centres are required, where the data can be processed and stored. It is estimated that the number of data centres globally will grow to more than 10 million in the next years.

None of us want to wait when we’re using the internet: Everything needs to be instantaneous and fast, whether we’re watching a movie on Netflix or browsing the web on Google. The data required for all of these applications originates from big data centres. Our objective is to accelerate that flow of data using optical technologies. Photons will break current limits and continue to replace electrons, step-by-step, throughout our networks. The expectation is that  the photonics market for data centres will become a multibillion-dollar market in the near future.

RealIZM: Where do you see differences with other countries, and what are the problems for developing data centres in Europe?

Tolga Tekin: The first of all the tech giants who are dominating IT, are mainly US-based. With their sheer size, they also have the power to dictate the entire value chain’s processes. They can freely determine which technologies they use in their data centres. Moreover, after privatization of telecom industry in Europe, including Germany, due to the global competitiveness, the structure of the European market has changed fundamentally.

By contrast, companies from Europe are still good at producing the necessary components. However, complete value chain is no longer existent: they have neither full freedom, nor a dominant market position. In the past, Europe’s telecommunication service providers stood on top of their entire value chain. Unfortunately, this type of overview across the entire ecosystem is now missing.

In addition, Big Tech has access to the latest technologies and does not have to standardize everything. They can rely on technologies from a wide variety of suppliers; they determine what they want to implement on their own.

Another concern is data protection. If we store large amounts of data in data centres outside of Europe, who can guarantee and regulate that the data will be handled responsibly? Europe simply needs a certain level of sovereignty in handling its own data. That was, for example, the idea behind the GAIA-X project, which was introduced by the Ministry for Economic Affairs and Energy at the end of 2019. The aim is to build a high-performance, competitive, secure, and sovereign data infrastructure in Europe. By sovereign, we mean data protection according to European standards. The GAIA-X will connect centralised and decentralised infrastructures in order to turn them into a homogeneous, user-friendly system, which is suitable also for small and medium-sized enterprises.

RealIZM: Which technical challenges do you see in this field?

Tolga Tekin: The challenges are well-known: Moore’s law, the memory wall and the heat wall. These are three problems that exist in practice and that have yet to be overcome. Photonic interconnects can be the answer here. They ensure that the chip’s internal communication can keep pace with the increasing computing capacity (Moore’s law), that communication between the CPU and RAM is fast enough (memory wall) and that they consume less energy compared to other alternatives, thus producing less heat (heat wall).

RealIZM: Three problems at once. And you think you can solve all three?

Tolga Tekin: Speaking generally, research in Europe over the past 10 to 20 years has been stream-lined, to a considerable extent, by the European Commission. This also resulted in various research and development projects for us. We started with PhoxTroT, which was a flagship project for data centre interconnects. PhoxTroT stands for “Photonics for high performance, low cost, low energy data centers, and high performance computers”. Its goal was to utilize optical methods to make data centres and high-performance computers faster on all levels: rack-to-rack, board-to-board and chip-to-chip. Above all, we developed optical interfaces and examined the interplay between the various hierarchical levels in order to ultimately enable larger bandwidths and leverage low latency.

Another project was L3MATRIX, “Large Scale Silicon Photonics Matrix for Low Power and Low-Cost Data Centers”. The main idea was to demonstrate the feasibility of co-packaging optics, photonic-digital integration. For co-packaging, the silicon photonics matrix is flip-chip assembled on a switch ASIC, so that the main bandwidth limitation can be overcome. With this technology, we achieved high radix and get extended bandwidth of 25 gigabits per second (Gb/s) in single-mode fibres and waveguides with low latency. In addition, we achieved a 10-fold decrease in power consumption compared to conventional technology, while keeping latency values on the order of 10 to 20 nanoseconds. Today, this technology is available to small and medium-sized enterprises for further development and integration into the data infrastructure that will power future data centres.

RealIZM: So, many challenges have been mastered. What needs to be done now?

Tolga Tekin: Nowadays, we’re mainly working towards the enabling of high volume manufacturing. For example, we have a project MASSTART, “Mass manufacturing of transceivers for terabit/s era”. It is a combination of economic and technological incentives, with the aim of high-speed data rates at reduced costs per data volume across Europe. Its new holistic transformation path enables the highest possible data rates with enhanced techniques, lower power consumption, and lower manufacturing costs per component. The targeted manufacturing costs are less than €1 per Gb/s outside the rack or €0.10 per Gb/s inside the rack. For this purpose, we’re using silicon, the same material that empowered the global electronics industry, to build low cost chips that generate and receive optical signals, namely Silicon Photonics combined with TSV, 3D-packaging. MASSTART is developing automated assembly and testing equipment, upgrading current practice of manual assembly which dominates module cost. Our inter- and intra-data center transceivers will meet the short- and medium-term requirements of data centre operators.

MASSTART will turn Europe into a producer of next-generation technologies, improve cross-fertilisation between photonics and other areas of technology and, strengthen Europe’s leading position in the global photonics industry.

RealIZM: How can other applications, like AI, benefit from these technologies?

Tolga Tekin: New disruptive technologies are paving the way for new applications driven by cyber-physical systems and artificial intelligence. Regardless of whether we’re speaking about von Neumann architecture based traditional computing or next generation computing such as quantum computing and neuromorphic computing, the bottleneck for all big, secure data applications or industries has remained, which is the lack of off-chip, off-core interconnects with low latency, low power, high bandwidths and high density. You want to have as little delay in the communication paths as possible and transmit as much data as possible. And moreover, it should be affordable. The solution for this could be photonics.

RealIZM: Where do you see the future development of optical technologies moving?

Tolga Tekin: The world’s supercomputers, the top 500, are already using optical cables for data communication. For example, we can see how essential the photonics technologies are for the entire telecommunication network. Now optical glass fibres are reaching people’s homes, and the smallest distances that can be realized are already at 30cm, 10cm and 1cm. This means that the electrical-optical conversion is moving ever closer to the processors. Photonic interconnects will soon be implemented in chip-to-chip and core-to-core communication. However, we should keep in mind that the industrial acceptance of such solutions is determined first of all by their cost.

I think that, in today’s global climate, it is important to keep refining competitive photonics technologies in Europe in order to strengthen leading position in the global photonics industry. Remember, if you don’t invest in technology, you will be left behind, and the sovereignty will suffer.

MASSTART project is co-funded by the Horizon 2020 Framework Programme of the European Union with Grant Agreement Nr. 825109.  https://cordis.europa.eu/project/rcn/219912/factsheet/en  www.masstart.eu

MASSTART project is an initiative of the Photonics Public Private Partnership. www.photonics21.org

PhoxTroT project has received funding from the European Union’s Seventh Framework Programme for research, technological development and demonstration under grant agreement no 318240. www.photrot.eu