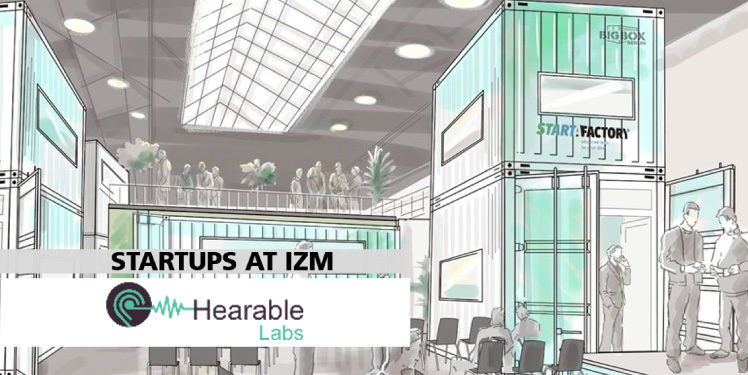 RealIZM meets Pauline O’Callaghan, the CEO of ‘Hearable Labs’, a start-up developing futuristic technologies that will live inside your ear.

RealIZM: Tell us about Hearable Labs.

Pauline O’Callaghan: I should start by telling you what hearables are: generally, they’re true wireless headphones that also allow you to control how you hear things, for example turning up or down the volume of the world around you, or focusing only on what you want to hear, such as the voice of the person you’re speaking to. Sometimes, they have other features such as biometrics or voice translation – basically like a tiny computer in your ear. I think hearables have huge potential to improve our daily lives – being in control of what you hear can reduce stress and improve concentration, not only if you have hearing problems, but if you’re bothered by noise in the office, on the train or in a noisy restaurant. They also have the potential to take over smartphones as our primary way to access information when we’re walking around – keeping us in the real world with our heads up and hands free.
But hearables come with a whole host of engineering challenges. They need to be small, they need to have a long battery life, they need to communicate wirelessly in a challenging environment (your ear), they need to sound great, they need to work in real time, so you don’t get a delay between what you see and what you hear. Hearable Labs exists to solve these challenges, so that more hearables can get to market. The collaboration with Fraunhofer IZM is really beneficial because we have access to experts in all of these engineering fields.

RealIZM: What is your product or service?

Pauline O’Callaghan: We help headphone companies build hearables. We do this in three ways: through feasibility studies to help them understand the technical challenges, budgets, and the timelines required to bring a hearable to market; through engineering services – developing hardware and software for their product – and through licensing; we offer technologies that we have already developed to help them get to market faster.

Pauline O’Callaghan: Our team has been working on hearables since 2008, a long time before most people heard of it. That gives us a huge amount of experience in what works and what doesn’t work, both from a technological and user acceptance perspective. Our core competencies are in electronic engineering, digital signal processing, and psychoacoustics – all essential skills to build hearables that look, work, and sound great.

RealIZM: Let us talk about your own story.

Pauline O’Callaghan: I come from Ireland, and I studied electrical engineering. I started my career working in the power industry in Ireland, in high voltage power stations. I found that kind of engineering job to be unfulfilling, because you spend a lot of time managing people and projects, but don’t get to do much real engineering. I wanted to really get my hands dirty. So I became a technician in a university physics department in Dublin, repairing lab equipment and building bespoke electronics for researchers. A few years later, I moved to London to join a start-up, building hearables for industrial workers. That was one of the first hearable products out there. I spent a few years in London, also working between London and Shenzhen on different manufacturing projects, before deciding to get back to the subject of hearables. I knew it was a really exciting technology, but not many products had been realised because there are so many engineering challenges. That was when I decided to start Hearable Labs. I moved to Berlin because I had heard it was a great place for hardware start-ups, and that has proved to be true. Start-A-Factory at Fraunhofer IZM is a great example of that.

Pauline O’Callaghan: We’ve won a lot of prizes for our hearable designs, most notably winning the MIT Grandhack in the US in 2019 – one of the biggest hackathons in the world. I think this is because the idea of hearables really resonates with people, and because we back that up with a solid team and a realistic plan for making this future we all talk about a reality. We’ve also had more local success – just last week we won 1st prize in the BPW Berlin-Brandenburg competition.

RealIZM: Any predictions about how this technology will evolve?

Pauline O’Callaghan: As I mentioned, I think hearables are going to become more like smartphones are now. They will have everything built in, so you don’t need to look at your phone as much. You can actually keep your head up and participate in the real world and just have another layer of information in your ear.

I think it will also become more acceptable to wear headphones all the time, even while you’re talking to people. At the moment, they are too big and don’t work well enough to do that. We’re starting to see people wearing Airpods while talking to each other, but that’s still considered to be very rude, especially by older generations and in the West.

RealIZM: What does your cooperation with Fraunhofer IZM look like?

Pauline O’Callaghan: We have an R&D project together with Fraunhofer IZM to miniaturise electronics for hearables. We have developed a reference design for a hearable device, and we’re working with the micro integration experts at Fraunhofer IZM to optimise its size, which will open up many new design opportunities for hearables. It will also make them fit better on women or anyone with smaller ears. Through Start-A-Factory, we’ve also become integrated with the wider Fraunhofer community, and we get exposure to a lot of exciting new technologies that are applicable to hearables.

RealIZM: Where would you like to be in five years?

Pauline O’Callaghan: I would like to see the technology we have developed in a whole range of products. I want to see that we brought forward that future I was talking about earlier, where people are not stuck in their phones anymore, but are able to have this connectivity without taking themselves out of the real world. I would like for us to still be developing futuristic technologies, with a bigger team.

RealIZM: Do you think that is realistic?

Pauline O’Callaghan: Yes, I would not be doing it otherwise.