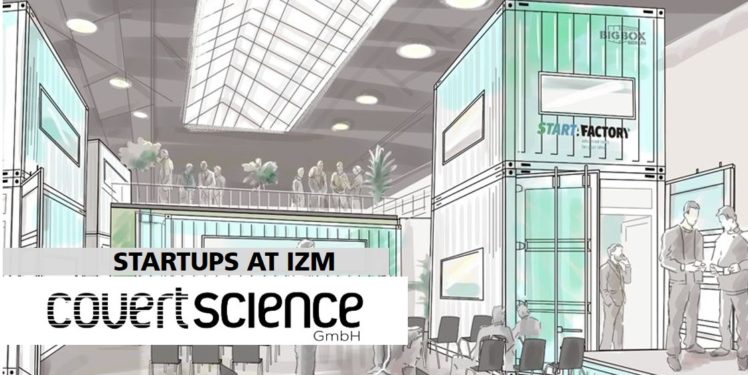 RealIZM talked with David Yellin, CEO of the startup Covert Science. He cooperates with Fraunhofer IZM within the Start-a-Factory project. We asked him about his research success in the area of Lighting and Power Electronics.

RealIZM: Could you tell us about your startup?

Covert Science: Covert Science is a startup focused on developing lighting technology, including new high-volume and low-cost methods of manufacturing LED lighting based on flexible substrates. We work on automating all the different ways for manufacturing of an LED light source in the form of a textile or fabric, because we think that, in the future, LED lighting will no longer be something that is made in rigid metal housings, but it will be incorporated into other objects such as wall coverings, ceilings tiles, and especially flexible fabrics. In order to do that we develop not only ways of putting the LEDs onto textiles but also of waterproofing them in order to protect them environmentally. In addition, our LED light sources will be integrated with the drivers, therefore we are developing power conversion electronics in very flat and flexible form factors.

RealIZM: Could you explain how your technology works?

Covert Science: There are various aspects; for example, we’re working on different types of plastic lamination and roll-to-roll lamination of LED textiles. It’s really a matter of selecting and testing the right materials, selecting the right temperatures, the right combination of different layers, and the right optical and mechanical properties. A lot of the work isn’t about a specific technology so much as a specific implementation of that technology.

In terms of power electronics, the main focus is on using higher frequencies and smaller components. Using new materials like gallium nitride transistors, we can go to higher frequencies, and reduce the overall size. However, this is isn’t necessarily beneficial because with smaller size, the heat generated in the system is concentrated in a smaller area, thus leading to higher temperatures and lower reliability.

We are therefore working on power topologies in which the thermal load is spread among a larger number of components than might conventionally be used. This enables us to make power supplies that are thinner and lighter, and don’t require mechanical methods for cooling.

Just as the rapid reduction in cost of LEDs has enabled new flat flexible form factors, the parallel progression in the power semiconductor market enables a similar development.

RealIZM: What are the benefits of this technology?

Covert Science: As an example, I have one customer who manufactures commercial lighting for offices or public buildings. He’s working on a project with a very large library. He wants to use our technology for some rooms that need to be retrofitted with LEDs. And it’s very convenient for him, because he can just put some tape on our product and can stick it permanently to the ceiling. Moreover, he will have much less visible power sources, because they can be hidden inside of flat cables. Of course there are many other advantages to be gained from flat, flexible, lightweight form factors. The whole supply chain is affected.

RealIZM: Which USP has you has your product in comparison to other companies?

Covert Science: I would say the combination of very high power per square meter, low cost, and ability to supply very quickly. The quality of the environmental protection we achieve through our lamination process is also considerable. As far as I know nobody else can produce it so thin with such high power and also have it waterproof. In addition, our services are customizable: We offer different solutions for different applications.

The focus of the company is on providing manufacturing services for lighting manufacturers. We don’t sell directly to the end customers who use the product;  we sell our products as half-finished raw material to manufacturers.

RealIZM: Why did you choose this market area?

Covert Science: I’ve been working in lighting manufacture for more than 10 years now and this is my third company in the same market area. In previous firms I was selling directly to the end users, but with this company I found that all my former competitors could become customers. So I have a very good knowledge of the market and good contacts in this market. I also have a good sense of what is technically required. Moreover, the market of LEDs and related power components is a very fast growing market.

RealIZM: What do you think about the future of this technology on this market?

Covert Science: I think that what will happen in the future and what is already happening is the outcome of the exponential reduction in cost of LED light sources per square millimeter of silicon combined with large increases in LED efficiency.

10 years ago, people were very focused on using as few LEDs as possible and running them at a very high power per dollar. There was a big focus on cooling the LED and also on providing a high-quality color.

Now everybody has a high-quality color in LEDs. And with the higher efficiency more of the heat is radiated as light. And the cost per LED will keep going down. The amount of power that’s emitted as light rather than heat will continue increasing and this will make it more attractive to incorporate LED into other objects that don’t need to be cooled. So the whole idea of cooling LED, which has been the focus of a lot of LED technology, will simply go away. It will change the nature of lighting.

RealIZM: Could you tell us more about the application?

Covert Science: There are different industries in which waterproof flexible LED lighting is used. Many niche markets need this kind of highly protected light and easy-to-use solutions.

RealIZM: Could you tell us about your research projects for different application?

Covert Science: Our technology can be used in smart buildings, conventional buildings, and retrofit lighting. For example in architecture there is an interest in walls and ceilings that are entirely covered with light sources. In addition, LED can be built into fabric structures like architectural membranes and roofs structures. Another application opportunity is stadiums, which are sometimes built with roofs made from inflatable pillows that can be equipped with embedded LEDs. Of course we also work in the area of stage and studio lighting, such as inflatable high-power lights for portable devices, e.g. for interviews and for news reporters.

Additionally, there are some outgrowths of the work we do here at IZM that have turned into completely different markets. For example, we are working on a mains power supply for high-power LED lights that is intended to be six millimeters thick. This can of course be applied to many other situations in which power conversion is needed, although we believe the biggest opportunity is still in lighting.

We also had some interest recently in using LED for water treatment, and we’re exploring how that could be done, because it requires using ultraviolet LED. We have to find out how much light is actually needed. In theory, we could mount waterproof LEDs on the inside of a water pipe. Our lamination process uses materials that are transparent to ultraviolet light, so the necessary wavelengths for water treatment would pass through.  So this could be a future project as well.

Smart farming is another possible application, because there is a lot of interest in using LED light sources in this area, whether as supplementary light in the winter time, or as a primary light source, such as in “urban farming.” We’ve had a proposal to make tents that have our LED light sources built into the fabric itself, along with certain sensors. One advantage in this case would be that you can easily clean our light source because it is completely impervious to water and chemicals commonly used in agriculture. Or the LEDs could be incorporated into stackable planters, so that each layer of plants would light the one underneath.

We are even looking into use our LED light sources for fish farming. There are already companies that provide supplementary lighting for fish farms in northern climates. Unlike conventional underwater light sources that are mounted in a waterproof capsule that is filled with air, we could directly put our laminated materials in the water. It can withstand a lot of pressure, and it’s very easy to manufacture.

Another field of application is the entertainment market. There are high-power lighting balloons that float in the air. Here it’s a big advantage to have a light weight solution that can be incorporated into the hull of an inflatable.

So there are still a lot of different applications we are exploring.

RealIZM: What is your startup’s great success?

Covert Science: So far, the biggest success is that we’ve been able to accomplish very high power density while keeping our lighting totally waterproof and totally protected. And we’ve been actually surprised by how much power and light is possible to generate out of a piece of fabric.

RealIZM: What are the biggest challenges in your business?

Covert Science: The biggest challenge is to find enough developer resources.I have some basic solutions and they need to be customized all the time. So my biggest challenge is finding engineers that can understand what we are doing.Another challenge is actually time. Time to do all the testing, optimization, and then to finish the development quickly.

RealIZM: How do you cooperate with IZM?

Covert Science:  We had actually developed quite a bit before we came here. And then we further developed those ideas in both power electronics and LED substrate technologies using the resources that we have here at IZM. In addition to our base at the Start-a-Factory, we cooperate with a lot of different working groups at IZM, especially Power Electronics and System-on-Flex. We also work with the department of Reliability and Environmental Engineering in terms of industrial design, and we just started cooperating with the Chip and Wire Bonding group as well. Moreover, we are planning some other projects in the future with optics.

It’s been really good working at IZM within the Start-a-Factory project, because we have an opportunity to develop a manufacturing process rather than just the individual product. We have found that it’s important to have a large variety of different expertise from the beginning, because otherwise you tend to build errors in your process that might be difficult to correct later. In other words, it’s much better to start with a lot of people who can provide their input during the early design stages of a product than to have a lot of people involved at the product release when the design is already fixed and changes are much more difficult and expensive. Working with IZM has been really good, because there are so many different specialties and different specialized people who have a lot of knowledge of different aspects that we were able to draw on.

RealIZM: Where do you see your company in five years?

Covert Science hope that we will have some manufacturing facilities and we will really “start a factory.”