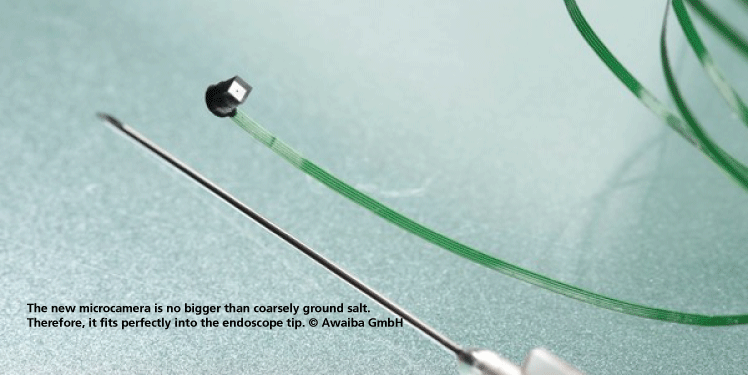 When the first cars hit the road, some people thought they were a fad that would soon disappear, because horses still seemed far superior to these early cars. Not so long ago, a major technology manufacturer thought that three computers would be enough for the whole world. When the first cameras were integrated into cell phones, they were dismissed as another gimmick. If one thing is certain, it is that every new technology will have its naysayers and doubters. We met Michael Töpper to speak about the incredible development of image sensors and the technology behind them.

RealIZM: What is happening with digital cameras?

Michael Töpper: In the last decade, the development of image sensors has revolutionized the world. 10 years ago, still ‘cellphones’ were used and the quality of the camera inside was indeed terrible compared to “conventional” cameras. Today’s smartphones can take really high-quality photos. The low-cost camera market has practically been wiped out by smartphones. When digital cameras first appeared, the market exploded and sales were immense – with smartphones coming up, it disappeared just as quickly.

RealIZM: Why do we hear so little about new developments in the field of image sensors?

Michael Töpper: We actually use these developments every day, but it’s more incremental improvements, not major leaps. When you read something in the press, it’s usually about topics that weren’t so well-known before. With image sensors, there are no big leaps right now, although things have been progressing quite rapidly over the last decade!

RealIZM: How are image sensors different from other sensors?

Michael Töpper: The way they work is actually similar to other sensors. The ATLAS detector at CERN, for example, was built to detect certain subatomic particles. To do so, it uses a number of sensitive layers on semiconductor devices, from which the images are then generated. Similar technology is used for x-ray images, as we all known from seeing our dentist: Digital imaging has totally replaced the conventional films they used to use.

RealIZM: Can you think of some milestones with image sensors?

Michael Töpper: The largest camera in the world has just been built by the SLAC National Accelerator Laboratory in Menlo Park for exploring space. It has 3200 MP and includes 189 individual sensors which are packaged together. The opposite extreme is an endoscopy sensor that we have further developed here at the Institute. This is one of the smallest camera in the world with an edge length of less than one millimeter.

RealIZM: What role does Fraunhofer IZM play in this technology?

Michael Töpper: Our assembly and interconnection technology is essential for reducing the mounting space to get packaged image sensors to fit, for example, into an endoscope. In other projects at Fraunhofer IZM, we are working on low-cost solutions for high-density wiring to place the components closer together. The longer the paths, the higher the electrical losses. This requires packaging technology, which is where Fraunhofer IZM enters the game. Packaging is very important even for normal-sized cameras. With the resolution that is possible these days, packaging has really played a critical role.

RealIZM: Which special properties have sensors got today, and which will they need in the future?

Michael Töpper: It depends a lot on the application. The smallest camera had VGA resolution, which is quite sufficient for e.g. detecting diseases in the lungs. For high-resolution vacation photos, users want high quality and therefore larger sensors.

RealIZM: Will they also be suitable for working with Artificial Intelligence?

Michael Töpper: This has even already become a trend in some cases. There are cameras that take pictures before the shutter button has even been pressed. When you see a great situation, it sometimes takes too long to get your finger on the trigger. There are intelligent cameras that decide when to take a picture and wait, for example, until everyone is smiling.

RealIZM: Can a smartphone ever become as good as an SLR camera?

Michael Töpper: There are still many differences, which are, among other things, of an optical nature. The analog-digital-converter chips are a major challenge. They are responsible for processing the signal from the sensor to the processor and turning the pixel signals into an image. When digital photography first started, you had to wait after taking a few pictures, because the data had to be processed first. The fastest consumer-level full-format cameras today can take 30 pictures per second and or more. The limiting factor right now is mostly the autofocus system. This is especially visible in wildlife photography: Still photos of insects or birds have to be taken at an insanely high speed. So the converter chips have to be very fast, and the best way to integrate them is 3D Si-stacking of the image sensor to the IC.

RealIZM: How does the 3D-Si integration work?

Michael Töpper: There is a new trend to bond the converter electronics directly underneath the image sensor. Especially with 4K or higher videos, incredible amounts of data have to get from the sensor to the analog-to-digital converter and into the memory. This is only possible with extremely short connections. Stacking the memory chip in a 3D integration arrangement was originally made primarily for high-priced cameras and later smartphones.

With bump-less hybrid bonding, individual wafers with different functions can even be bonded on top of each other. This would not work using a side-by-side assembly of the components on a conventional circuit board, because the speed would not be sufficient.

RealIZM: What are the challenges with image sensors?

Michael Töpper: The assembly space in smartphones is extremely limited. This is why, as I said, packaging plays a very important role, because a lot has to be miniaturized.

In addition, another major issue is heat dissipation in the systems. Cameras get hot when a lot of pictures are taken, and this heat has to be removed from the system. Heat creates a certain amount of noise in digital photography. This is especially noticeable when shooting in the dark. Then the sensitivity is turned up and the pixels start to disturb each other due to heat effects. Special trenches have been integrated into the image sensors between the pixel to reduce this effect.

RealIZM: What are your goals as an IZM representative?

Michael Töpper: I am business developer at Fraunhofer IZM and looking for opportunities for new projects in the area of miniaturization and 3D integration. This is about connecting different integration levels for further higher system intergration.

RealIZM: How can the Institute’s knowhow in the field of 3D integration help push this technology?

Michael Töpper: Fraunhofer IZM has been working on 3D integration for Si devices for 15 years, and this got us to pole position in R&D. We have the ability to connect different semiconductor levels. You will never make a microprocessor and an image sensor on the same wafer. They will always be separate. This means that a technique is always needed to bring different components together, and this is what is known today as heterointegration.

RealIZM: Are there many funded projects in this area?

Michael Töpper: There is support for the basic technology. But there are and were also many areas that were not taken seriously at the beginning, such as putting cameras in phones to get what we now call smartphones. The potential of many applications is often not immediately recognized, which naturally slows down the development of these applications.