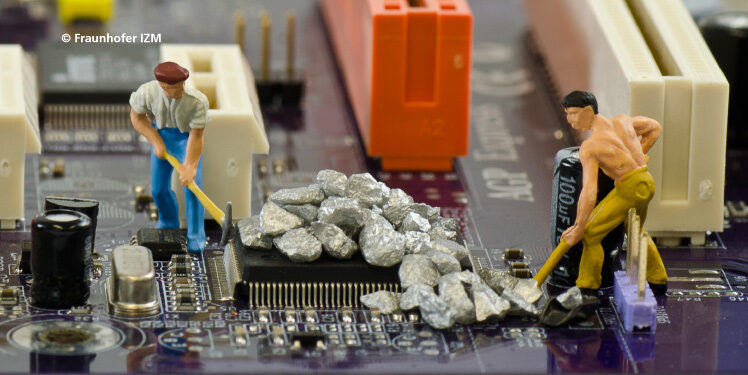 Fraunhofer IZM is actively involved in the Federal Institute for Geosciences and Natural Resources (BGR) study “Raw Materials for Emerging Technologies lll”, commissioned by the German Mineral Resources Agency (DERA). The project explores the likely trajectory of emerging technologies coming into industrial use to understand the use cases and the resulting demand for raw materials. It also tries to offer new insights concerning possible recycling, matters of resource efficiency, and possible substitutions for each technology to get some pointers about how demand will be shifting in the future. Jana Rückschloss’ contribution to the study focused mainly on data centre technology, but her experience lets her give RealIZM a brief overview over the entire project.

RealIZM: Tell us, why is this project necessary?

Jana Rückschloss: Predicting the future is always difficult and fraught with great uncertainty. Nevertheless, these studies are enormously important for recognizing trends in raw materials at an early stage. In this way, we can act to avoid bottlenecks in the supply situation – whether by developing other technologies or by expanding our supply routes.

Jana Rückschloss: We define them as industrially exploitable technical capabilities that trigger revolutionary innovation far beyond the boundaries of individual economic sectors. The previous study listed 168 such future technologies, which we expanded to 250 for the current project, based on available literature. In addition, an expert workshop was held to look at clusters and mega-themes, rather than sectors of industry. The 33 technologies to be considered were defined in March 2020. The criteria here included the (future) criticality of raw materials, technological trends, political interests, and the completeness of individual clusters. For the actual study, Fraunhofer IZM is responsible for a wide range of technologies: from lithium-ion high-performance energy storage for mobile applications or indium tin oxide in display technology to high-power and high-frequency microchips and data centres.

RealIZM: Can you introduce your research methodology to us?

Jana Rückschloss: Fraunhofer ISI has already been active in this field for many years and had already developed and tested some of its own models in several instances. For the project, we refined the existing models to fit the selected technologies and proposed scenarios, which were chosen based on the Shared Socioeconomic Pathways (SSP). The time horizon is 2040, and the base year is 2018, because feedstock consumption data is rarely available for the current year.

RealIZM: What are SSPs?

Jana Rückschloss: The SSPs were developed in 2011 as part of the fifth assessment report for the Intergovernmental Panel on Climate Change. They describe different global socio-economic developments for the 21st century. An SSP is always based on a narrative, i.e., a description of developments in the global community, and its corresponding quantification, e.g. population growth, GDP, education, etc. The goal for our technology synopses is to estimate the raw material requirements for each individual SSP.

RealIZM: Can you sum up the results of the previous 2016 project on “Raw Materials for Emerging Technologies”?

Jana Rückschloss: That study also formed scenarios to predict how demand for raw materials would develop (until 2035). In the case of lithium, for example, the demand for the future technologies considered at the time was around 600 tons per year, while production was near 30,000 tons. This is not problematic for the present. However, if the worldwide use of such future technologies continues to develop as predicted, the annual demand for lithium in 2035 would be about four times higher than global production in 2013. So, we either need a technological leap to buffer this, or we have to increase production.

RealIZM: Can you tell us about your research results and approach in the actual project? How exactly are data centres relevant in this project?

Jana Rückschloss: Data centres were investigated for the first time in the study series. For the project, I focused on storage media, which represent one of the key components of data centres. Data centres actually use a wide range of highly complex technologies. It would have been just as conceivable, for example, to examine the power supply, the surrounding infrastructure, or network components.

We first carried out a market analysis of the current and possible future storage technologies. From this analysis, we identified Solid-State-Drives (SSD), Hard Disk Drives (HDD) and, surprisingly, magnetic tapes as relevant storage technologies. On top of them, but more marginally, we considered future developments, such as DNA-based systems, Flapes, or HAMR/MAMR. As our reference unit, we chose the amount of data stored in data centres.

One problem for our research was how quickly the datasets change: The amount of data stored can scale up or down very quickly due to, for example, changes in coding, protocols or security policies. Nevertheless, it was the best option for estimating how data centres will develop over the next decades.

RealIZM: What amount of data are we talking about?

Jana Rückschloss: According to a statistical report,[1] humanity as a whole generated 33 zettabytes of data in 2018. One zettabyte equals 1021 Bytes. This corresponds to 666 billion standard blu-rays, 33 million human brains, or 73 grams of DNA.

RealIZM: How did you set up your data centre scenarios?

Jana Rückschloss: We first had to establish a basic mathematical model for the development of the volume of data, which is itself influenced by many factors.

The factors include: first, the global volume of data that is stored in data centres. Second, the development of storage technologies, meaning potential increases in storage capacity, density, and speed. Third, the data’s distribution among the different technologies. Today, about three quarters of data is still stored on HDDs in data centres, although the share of data stored on SSDs is steadily increasing. Magnetic tapes also still make up a substantial portion.

And fourth, the redundancy factor is also very relevant, as it directly influences the required storage capacity.

RealIZM: What are the challenges?

Jana Rückschloss: A study like this, needs lots of reliable sources, but we only had very few available. Innovation cycles are very short, meaning that sources are quickly obsolete. In addition, there are also massive changes in technology happening all the time, which are hard to predict. Predictions about data volumes are rather difficult to find. They tend to go a maximum of five years into the future, and when you look at past prognoses, most of them unfortunately turn out to be incorrect. Also, things like technology leaps are still difficult to project.  For magnetic tapes, for example, the goal is to double their storage capacity with each new generation. However, LTO 9, as recently announced, will only manage to increase storage capacity by a factor of 1.5.

And finally, there is a lot of competitive pressure among providers, which is why very little data is freely accessible.

RealIZM: What have you found out so far?

Jana Rückschloss: Despite all of these challenges, I developed a calculation model that maps the three selected SSPs (the resource-saving, base, and the resource-intensive scenarios) in terms of future data volumes in data centres.

To calculate the demand for raw materials for each scenario, I first forecast the volume of data in data centres and then its distribution on different data media.

In the resource-saving scenario, we predicted a data growth rate of 32%, meaning low data volume growth, and at the same time high storage capacity growth per storage unit. This means that each storage unit, including SSDs and magnetic tapes, can store more data than before. With the amount of data not increasing all that quickly, and each storage unit holding more of it, we arrive at the lowest total resource consumption.

Considered overall, the volume of data (in Zettabyte) will increase substantially by 2040, regardless of the scenario. The only question is which dimension of growth we are speaking up.

And concerning data media distribution, according to our research, HDDs accounted for around three quarters of storage media in 2018. Magnetic tapes were at 20%, and SSDs had an insignificant share. This is particularly due to the fact that HDDs and magnetic tapes are inexpensive compared to SSDs. Magnetic tapes also have the great advantage that they store data without needing power, and they are extremely cheap. Nevertheless, as prices for SSD storage data decrease, it is expected that the share of SSDs will increase significantly by 2040 and change the distribution ratios in the field.

RealIZM: How do we get from data volumes to raw materials?

Jana Rückschloss: For our next step, we used this data to calculate the raw material demand for each type of medium and for each of the scenarios. We used different data sources, for example, the DERA list of world raw material supplies. The DERA list is a source that ultimately shows what the world’s production of critical raw materials was in 2018.

RealIZM: Which results did you get?

The most interesting and critical materials in our case are, according to our research, ruthenium and platinum.

In data centres, the large amounts of data stored currently still result in considerable demand for HDDs, for which ruthenium and platinum are needed. Due to the “unrestricted data use” in the resource-intensive scenario, the demand for ruthenium in 2040 would be 18 times higher than its production in 2018, while the demand for platinum is four times higher. The production volumes of raw materials can, of course, also change over the years, but these processes are slower than possible leaps in technology or unexpected demand in the industry.

However, with SSDs, a technology is already available that can be used to substitute HDDs. But as SSDs are still significantly more expensive than hard disks, the technology will not establish itself as quickly in the market as previously assumed. HDDs will therefore still play a major role in 2040.

The full version of the study you can find here: https://www.deutsche-rohstoffagentur.de/DERA/DE/Produkte/Schriftenreihe/schriftenreihe_node.html

RealIZM: What are your research aims for the next five years and how could it help the industry become more efficient?

Jana Rückschloss: At Fraunhofer IZM, we work for a more efficient use of energy, critical raw materials, metals, and other resources through innovations in manufacturing processes and the use and/or end-of-life (including recycling) of products. This means not only electronic components, but also devices as a whole. Our mission is to provide the industry with solutions for a more efficient use of resources through substitution, higher reliability, longer service lives, and recycling-friendly designs as well as the optimized environmental compatibility of assembly and interconnection technology processes.