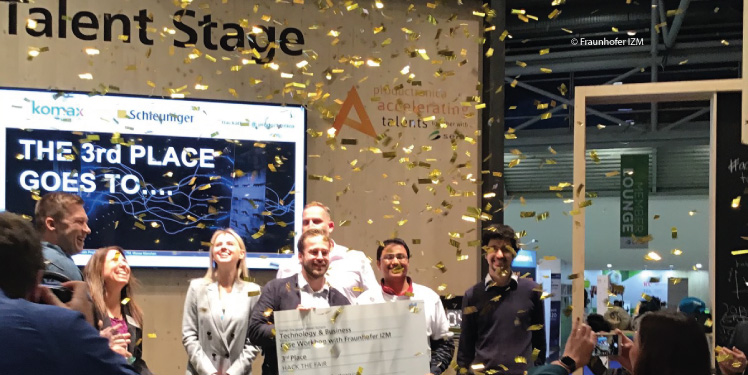 From industry 4.0 and cloud systems to autonomous vehicles – the key to innovation lies in electronics. At the Productronica 2019 expo in Munich, the world’s leading show for electronics development and production, the VDMA, Fraunhofer IZM, and Messe München organized a hackathon for young engineers, software or hardware developers, scientists, students, start-ups, and entrepreneurs. The hackathon took place as a live event at the fair’s new Accelerating Talents Area. A hackathon is an ideas and innovation competition in which interdisciplinary teams work together over a period of 48 hours to find concrete solutions to the challenges put to them by component, machine, and plant manufacturers in the electronics industry. The challenge setters for this hackathon were Komax and Schleuniger.

Ponnappa Cheranda (VDMA Productronic) and Ulf Oestermann (Fraunhofer IZM) were both part of the hackathon and told RealIZM about their experience, their future plans, and how this type of event could help industrial companies find new business ideas and solutions.

RealIZM: What were your intentions for this hackathon?

Ponnappa Cheranda: We wanted to bring companies together with start-ups, students, engineers, and entrepreneurs. Our goal was to provide a platform for our member companies and other companies, start-ups, and students to work on real-life tasks that tend to get overlooked in everyday business. It is also an opportunity to get to know future cooperation partners, sponsors, or employees. And, of course, it is also about the visibility and image of the company, which should not be underestimated from a marketing point of view.

Basically, every company can be a challenge setter. In the recent hackathon, the only requirement was to have an actual booth at the productronica expo.

We are very grateful for being able to cooperate with Fraunhofer IZM and Messe München. We have already had very good experiences with both partners in the past, and this year’s hackathon confirmed this once again. Naturally, none of this would be possible without the Hack-the-Fair team and all the people working in the background.

RealIZM: Why did you organize the hackathon together with Messe München?

Ulf Oestermann: The original idea actually came from VDMA Startup-Machine and Fraunhofer Venture. Before we came to productronica 2019, an event had already taken place in Berlin in May, but bringing it here to the fair is a concept we will keep exploring for the future. The younger generation does not have the same access to trade fairs as people over 40 and 50 have, who attend almost every relevant exhibition on a regular basis. This means that fairs must show their continued relevance by offering formats that are interesting for younger visitors as well.

RealIZM: What is the biggest challenge when organizing a hackathon?

Ponnappa Cheranda:We must make sure that companies can clearly see the benefit for them. So, we really want a hackathon to be an attractive option for companies to participate in to get inspiration and ideas. The ones who took part this time will, of course, realize exactly that. But even with the advantages for companies that I mentioned, it is difficult to find challenge setters and participants – that could be a bottle-neck. This means that you need resources to organize something like this, both monetary resources and simple capacity.

RealIZM: Which improvements could be made for future hackathons?

Ulf Oestermann: The format itself should be kept in any case; it only needs a little adaptation. At the moment, this is still an isolated solution all of its own. It’s not yet connected with the goings-on in the hall and is not yet as integrated into the trade fair activities as it ought to be. It is still a little outside the daily routine. This is for a reason, because we want to give the students more peace and quiet. However, this also prevents, to some extent, our actual intention of establishing a place where established companies and these younger teams can get together.

RealIZM: What makes cooperation with start-ups and students so important?

Ponnappa Cheranda: It used to be “I’m starting a business”, now it’s “I’m starting a start-up”. I think this is important, because all of society, humanity as a whole even, is currently experiencing a massive change brought about by digitalization and agility. Through this transformation, we are all currently going through a process of change. The cycles are always short-term, so we need students and start-ups who are dedicated to these issues to come in and support associations and companies. It is too tough to handle on your own. It is so important to cooperate and to advance projects, ideas, and tasks.

The aim of the hackathon during productronica was to meet the real challenges facing mechanical engineers and plant manufacturers in the digital age and to develop new approaches to possible solutions. Experienced mentors advised and supported the teams in implementing their ideas. At the end of the hackathon, the developed prototypes were presented to a renowned jury of experts and the best ideas and concepts won a well-deserved reward.

RealIZM had an up-close-and-personal experience of the hackathon at productronica 2019. We not only interviewed the people organizing the hackathon, but also some of the participants. Some of the team met by chance, others were already successful start-ups, but they all included young and intelligent people who all had the same energy and excitement about the opportunities this hackathon provided for them.

RealIZM: Would you please introduce your start-up for our readers?

Pragmatic Industries: We are Pragmatic Industries, founded in 2016. Essentially, we generally do a lot of work in digitization and industry 4.0, but we’re mainly cooperating with medium-sized mechanical engineering enterprises. This means that we offer very customer-driven solutions. Specifically, interaction with data is something we are dealing with a lot. We have what we call the ‘digital cockpit’, which works as a platform to visualize collected data.

RealIZM: What do you expect from this hackathon?

Pragmatic Industries: Our main hope is customer acquisition. But we also want to get more experience, meet new people, work with new technologies, and – maybe – have some fun.

RealIZM: How did you get together?

Pragmatic Industries: We are a kind of spinoff. Our boss and some of his colleagues at another company wanted to try something different or, in other words, something for themselves. This pragmatic approach also gave rise to our name.

RealIZM: What are your goals for the next few years?

Pragmatic Industries: We want to get established in our market. We’re already on the right track with that, and we want to keep evolving, in ourselves and in our technology.

RealIZM: Would you please introduce your team?

IT Avengers: We named our team the IT Avengers. The Avengers are superheroes who are there to save the world. We are superheroes who want to save the IT world. We are a team of students from the Esslingen University of Applied Sciences. We are moving in the direction of process optimization in manufacturing, in the sense of reducing time and costs.

RealIZM: Are you planning to launch a start-up together?

IT Avengers: It is definitely an idea we have at the back of our minds, and we want to keep this option open. We finished several projects at university together, and we are working great as a team, but we do not have any concrete plan to do so right now.

RealIZM: What do you expect from this hackathon?

IT Avengers: We do not have any specific expectations. We got involved, and we wanted a challenge. We wanted to know what kind tasks we would be given and how a hackathon works in general. We were honoured to be here and to get to know so many people and live this great experience.

RealIZM: What is the name of your team?

My Reality: Our team is named My Reality, and our challenge is about plans meeting the reality. We discovered each other here at the hackathon itself, during the team building event.

RealIZM: What are your goals for the hackathon?

My Reality: We want to participate and discover new things. We want to widen our horizons a bit, because some of us are from the industry and need some knowhow to inject some outside-the-box thinking. We also want to extend our networks by getting in touch interesting people.

We, the RealIZM team, are exhausted, but incredibly happy after a whole week on the fair. The “Hack the Fair Hackathon@productronica” offered an unbelievable amount of input, interesting people, and eye-opening ideas for everyone. The opportunities that emerged from it seem endless. Also, Ponnappa Cheranda sounded very positive during his closing statement after the productronica 2019.

Ponnappa Cheranda: I talked to the challenge setters, some of the cooperation partners, and several participants. The challenge setters and the cooperation partners so far seem satisfied with the solutions and the new contacts. The start-ups, students, and the other participants also sounded happy. They said they enjoyed the event and are grateful for their new gained experience.We have already been approached with people asking about when the next hackathon will take place. There is a definite hunger for the format, and we are excited to see when and where we will come together again.

This interview was conducted by Yulia Fedorovich and edited by Marieke Lienert from Fraunhofer IZM Marketing & Business Development department.