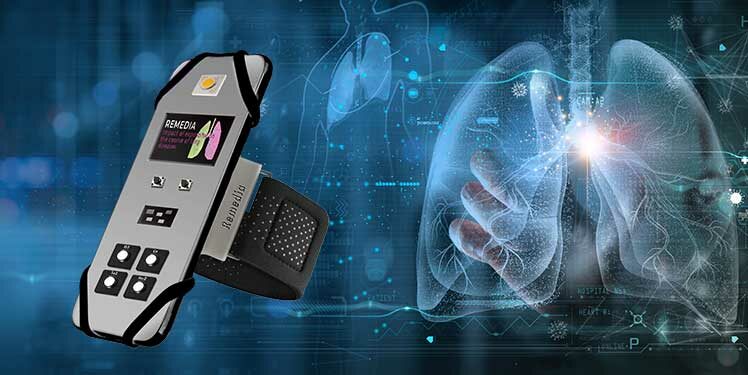 Basel Adams, together with his colleagues Christine Kallmayer, Lars Stagun, Valerie Fetzer, and Henrik Sinnok, is developing an environmental toolbox that patients could wear as an armband. The box contains several sensors that can measure a wide range of environmental factors. Basel Adams explains more about the technical features and the REMEDIA project in our interview.

COPD is third among the leading causes of deaths worldwide. Globally, hundreds of thousands of people are estimated to be living with CF. Based on registry data, the life expectancy of people with CF is predicted to be 46 years.  An estimated 12.6 million deaths each year are attributable to unsanitary environments. Of these deaths, 7 million are caused by air pollution leading to chronic respiratory diseases.

RealIZM: Today, we want to talk about REMEDIA. This is a major EU-wide project with many partners. Can you summarize for us what the project is all about?

Basel Adams:  The REMEDIA project aims to improve health and reduce the overall burden of disease by addressing the impact our environment has on people’s health. The overall objective of the project is to determine how and to what extent the exposome – the sum total of environmental factors our bodies are exposed to – affects the severity and morbidity of COPD and CF throughout the disease’s progression, thus providing key insights to help design more perfectly tailored prevention and care programs.

It is well known that poor air quality has a negative impact on these diseases. However, we do not yet know what exactly causes them. The REMEDIA project was initiated by medical doctors, and the idea is that we build two sensor modules that can measure different environmental influences. The first sensor module is the Biomarker kit that is being developed by EU partners from France, Belgium, and Germany. It is supposed to monitor the patient’s current physical state.

Together with Fraunhofer IZM, we are developing a second kit, the environmental toolbox. This box contains different kinds of sensors which are able to measure environmental markers like toxic gases, particulate matter, light or noise etc., all of which are thought to have an impact on lung diseases. The project started in mid-2020. This year, we will finish the toolbox. Next year will be about the measurements and tests with the patients. The project should be finished by December 2024. Funding-wise, it is indeed a big project. Our funding is €11 million, and there are lots of partners. Fraunhofer is getting about €1.7 million.

RealIZM: And what exactly does the module you are working on measure?

It is important to measure toxic gases indoors and outdoors. The indoor concentration of these gases is normally very low, that is why the sensors have to be very sensitive. Many other parameters like GPS coordinates and time should be also captured and stored on a database on a local SD card.

RealIZM: So, there are many things you are measuring with this armband you mentioned. Which parts of it were developed at Fraunhofer IZM?

Basel Adams: Well, at the beginning, we tested over 60 different sensors. Almost 90% did not meet the requirements. Our goal was to find very precise and, at the same time, very small sensors, because we wanted to miniaturize the module. After testing the individual sensors, we started to develop the hardware and software of the environmental toolkit so that we can read data from all system components at the same time, store them in a database, and present them on an OLED display. The next step is then to integrate the module into the armband.

Basel Adams: There will be one module attached to a stretching bracelet. The module contains all the sensors, the battery, and all other system components (GPS, display, MCU, power management circuit etc.). In our process, we integrated the three modules planned initially into only one and managed to miniaturize everything even further. The complete toolbox is as big as a smartphone, which is a well-known form factor.

RealIZM: And what happens to the measured data?

Basel Adams: Across the EU, many patients will be wearing these devices for about half a year. Over 40 parameters are stored every 10 seconds in the form of an Excel table on an SD card. These results will be correlated with the results of the biomarker system developed by our EU project partners. At the end, the clinical partners involved in the project will try to find out two things: A: Which of the environmental parameters influence COPD and CF diseases? And B: How strong is the correlation between the measured environmental factors and the patients’ condition?

RealIZM: What is your current progress with developing this kit?

Basel Adams: We’ve been collecting the specifications for over a year now. We then worked with Fraunhofer ITEM to determine what could be measured, i.e. what our sensors can do. So, we tested a lot of sensors, and selected some of the best in the world. We then developed the circuitry and firmware needed to evaluate everything. Right now, we are in the process of miniaturizing the system components to fit the armband.

RealIZM: What hurdles did you have to overcome within the project?

Basel Adams: The biggest hurdle was finding the right, highly sensitive sensors for toxic gases. At the beginning, we developed many different circuits to test different sensors. We even met up at Fraunhofer ITEM in Hanover for this very purpose. Only a few of the sensors we tested picked up on the low concentrations we wanted to measure. We were able to rule out light and chemical sensors and finally, after a year of testing, decided on a new type of sensor, MOS sensors (Metal Oxidation Semiconductors) for gas measurements. Our goal was to select sensors that could detect a single gas with a long lifespan and protection against poisoning, fast response times, and a stable zero return time. They should have low power consumption, be small, and connect to a microcontroller. The most important point was that the output has to be independent of temperature and humidity and that the sensor can measure in the range of several PPB (parts per billion).

The second challenge was the cross-sensitivity of the sensors, that is, when a gas sensor reacts with another gas. The question was how we could distinguish all of the measured values from each other when they are to some degree reacting with each other. That’s why we use a certain algorithm to evaluate the value for a given gas. We have been able to solve all these problems very well.

Miniaturization of such a system with over 100 components/sensors into an armband is also a big task, but with our long experience at IZM with miniaturizing electronics, we will overcome that challenge as well.

RealIZM: REMEDIA is an EU-wide project. How are the results of the different working groups brought together at the end?

Basel Adams: After the measurements have been taken, the medical community decides which of the parameters actually have real influence on the course of the disease. Since we then also know which of the parameters are high in the different European cities, doctors can ultimately make recommendations for their patients: If you can detect risk factors, you can intervene immediately with behavioral adjustments or medication.

RealIZM: That sounds like an important step forward for dealing with these lung diseases. What could be some other applications for this sensor box you’re developing?

Basel Adams: Currently, there is no single mobile environmental measuring device in the world that is as small and can measure most relevant environmental parameters with high accuracy as the one we developed for the REMEDIA project. It could therefore be used for many other interesting, similar projects for mapping air quality in cities.

This interview was conducted and edited by Jacqueline Kamp