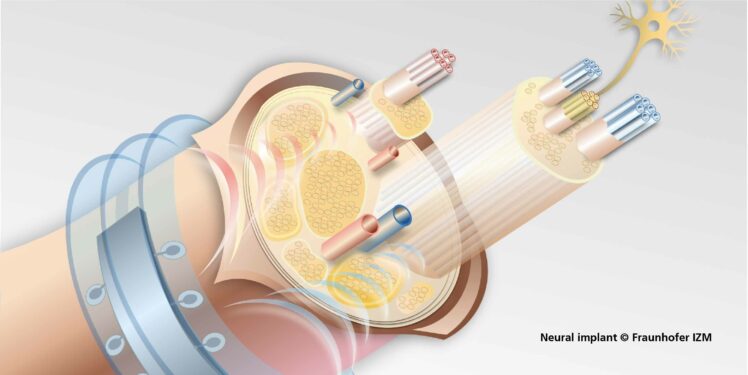 The Moore4Medical project brings together no fewer than 66 companies, universities, and research institutes from more than ten countries. Their aim is to develop open technology platforms that offer revolutionary new opportunities for the medical sector and its patients. Fraunhofer IZM is one of the partners focusing especially on implantable devices. RealIZM met Andrada Velea and Vasiliki Giagka to speak about the status quo, challenges, and the details of the technology.

RealIZM: Can you start us off with a quick overview of the Moore4Medical project?

Vasiliki Giagka:  My team and I are working on a new generation of implantable devices. One of our main goals is to power implants via ultrasound. Implanted devices need to be powered wirelessly, as we cannot have big batteries or long wires inside the human body. Currently, these implants are powered through batteries, which are typically large and need periodic replacement. What we would like is to either remove them completely or be able to recharge smaller ones periodically, which means that we need a way to transfer power wirelesslly to these implants.

RealIZM: How did batteries work until now?

Vasso Giagka: The batteries remain inside the body until their energy is so low that they need to be replaced. This involves surgery, and that is exactly what we want to prevent with rechargeable batteries. Efficient energy storage is one of the biggest technological challenges in medical technology, and it seriously is holding back innovation in the field.

RealIZM: How do you plan to charge the batteries without wires?

Vasiliki Giagka: We want to transfer power wirelessly to very small implants that are placed deeper inside the body, which is why we are looking at ultrasound transducers integrated into these micro-implants themselves. These transducers act as receivers that can absorb the energy contained in the acoustic waves transmitted from the outside. In other words, in order to transfer power in this way, we need two transducers (which could also come in the form of arrays). You need one on the outside that, let’s say, vibrates and sends pressure waves through the tissue. And you need one inside the body, at the implant site, that starts vibrating once these pressure waves reach it. These mechanical vibrations or pressure waves are converted into electricity that is used to power the implant.

RealIZM: How far have you come with your research?

RealIZM: Are there any other goals you are pursuing in the project?

Vasiliki Giagka: Apart from wireless power for small implants, we are also exploring ways to stimulate tissue. Traditionally, this is done by electrical means but, in this project, we are using ultrasound for neuromodulation. There are billions of neural cells inside the human body and, ideally, we would like to have a means to interact with each of them. Ultrasound could potentially give us this capability, because by combining different acoustic waves, we can create very small focal points to target specific locations inside the body.

Andrada Velea: In the project, we are also focusing more on the peripheral nervous system. The nerve diameters we are targeting are in the range of a few mm, which means that, first, these implants have to be extremely small and, second, the focal points have to be in the range of µm to effectively target the individual neurons or fibers making up the nerves. This way of neurostimulation gives us the power to be very specific when delivering the therapy and, what is even more important, without affecting the whole body, as is usually the case with drug-based treatments.

RealIZM: Are there any other advantages to this?

Andrada Velea: Many treatments come with high costs and severe side effects, or have to use poorly adapted medicines. Nerve stimulation can be used to treat diseases such as rheumatoid arthritis, chronic headaches, asthma, or Parkinson’s disease.

Vasso Giagka: At the same time, the ultrasound waves can also serve as a communication channel between implants and external diagnostics: In this way, the recorded data can be sent directly to the outside world for further evaluation. This allows us to monitor how the therapy is going and see whether it has to be adjusted. This is what we call ‘personalized medicine’.

RealIZM: This sounds like a software solution at some point, right?

Vasiliki Giagka: It could be handled by software or by the physician analyzing the data received from the implant. What we are dreaming of is an automated system that understands on its own what needs to be adjusted – but that is decades from now. To start with, we will get a means to collect the information, and then more competent people will work with it and decide the next steps.

RealIZM: What challenges are you currently facing?

Andrada Velea: The implants consist of so many different components: transducers, electrodes, passive components. They all need to be miniaturized down to µm scales. And maybe even more importantly than this, there are the materials we use. They need to be not only biocompatible, but compatible with the acoustic domain for an efficient transfer of energy between implants and tissue. We are still looking for the right material.

Vasso Giagka: Data security is another important point, too. As we are talking about implants inside the human body, we need to make sure that nobody is able to hack the information. This is not our task, but other people are working on that, because that will be a central issue.

RealIZM: How exactly is the project related to Moore’s Law?

Vasiliki Giagka: According to Moore’s Law, the performance of chips should double every two years. This is particularly noticeable in consumer electronics, but not in medical technology. This is due to the fact that the question of energy storage has not yet been solved. If batteries are rechargeable, both batteries and implants can be made smaller. Usually, the size of individual components and resolution that we can achieve improves year after year. This works to our advantage, because we are using microfabricated devices in the project. However, the question of energy storage still remains unresolved. Solutions have to be found, and this is one of the main goals of Moore4Medical.

RealIZM: Is energy storage the only reason for the slower pace of innovation?

Vasso Giagka: Medical technology is a very conservative field, because safety is paramount in it. Consumer electronics are less regulated, because the products usually do not affect anyone’s life. Medical devices have to go through many stages with regulatory aspects and get approval at every turn. That is why medical devices have not changed much over the last years.

RealIZM: How could we imagine the final product of Moore4Medical to look like?

Vasso Giagka: That is not easy to say. We have to develop prototypes that are safe, secure, and effective. There is a lot of back and forth with those devices, as you cannot say ‘Here is my idea, I want to patent it and put it on the market’. Our final product will be what we call a platform. You can imagine it like a toolbox with different building blocks. We develop some components that you can use, and you could also build more components on top of them for specific applications.