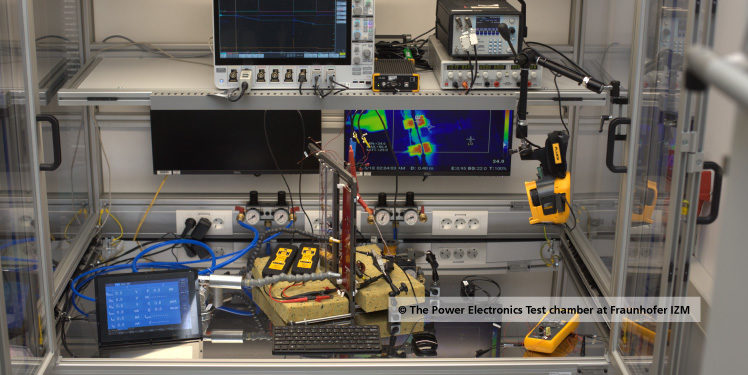 Power electronics systems have to shoulder a heavy burden in terms of what is required of them and what they are expected to deliver. At Fraunhofer IZM, Stefan Hoffmann is working hard on new designs for passive and magnetic components to improve the design of inverter systems. He and his fellow researcher Adam Kuczmik are manning the test chamber where they measure switching losses in their search for the perfect system design. “Their applications? Pretty much everything imaginable in power electronics”, they tell RealIZM.

RealIZM: Maybe we could start by you introducing yourselves and your work?

Stefan Hoffmann: I have been at Fraunhofer IZM for nine years. My work is based in the power electronics group of the System Integration and Interconnection Technologies department. Part of our group designs semiconductor modules, which are the heart of power electronic inverters. Another part of the group is concerned with finding out which improvements can be achieved at the system level with faster switching semiconductors in the power modules. I am a system designer, and I deal with optimizing the power density and efficiency of power electronic systems.

Adam Kuczmik: I originally came to Fraunhofer IZM in 2008 as a student and wrote my bachelor’s and master’s dissertations here. Stefan and I did many projects together. However, in 2018 I started my own business. Nowadays, I do research and development work for the industry and try to sell switching loss test chambers and teach people about switching loss measuring. Stefan is currently writing his PhD thesis, and I am interested in improving the test chambers, so we came together again to carry this forward.

RealIZM: What is special about your semiconductor modules for power electronics?

Stefan Hoffmann: We’re using modern wide band gap semiconductors, because there are hardly any projects left in our working group that work with conventional silicon. Silicon carbide and gallium nitride are both compoundsemiconductors that have larger band gaps, which allows the semiconductor layers to be made smaller. Put simply, transistors in power electronics are operated by switching, switching causes losses, and these losses can be reduced with modern wide band gap semiconductors because they can switch must faster due to their thinner layers.

RealIZM: Why is it important for you to switch faster?

Stefan Hoffmann: With faster switching and fewer switching losses, switching frequencies can be increased, which means that you don’t need to store so much energy in the inductors and capacitors. Switching produces discontinuous voltage and current patterns. Energy must be temporarily stored at the input and output side of a converter in order to turn those voltage and current staccatos back into smooth, time-continuous signals. Reducing the semiconductor on/off times is a great advantage at the system level.

Adam Kuczmik: Our overall goal is to reduce the size of the inverters that are on the market. A converter with a conversion power of 15 kW could be reduced to the size of two milk packs with modern power modules like the ones developed here. This means a reduction in volume by more than a factor of 20.

RealIZM: Could be reduced, or can be reduced already?

Adam Kuczmik: It needs to be done anew for every project. A solar inverter has different requirements than a drive inverter installed in an electric car. With every technological step the module provides, whether it is thermal or concerning switching losses, further miniaturization can be achieved.

RealIZM: How are the switching losses related to size?

Stefan Hoffmann: We measure switching losses because we want the system to be designed in the best and most perfectly targeted way. For this purpose, we have to know the losses in each individual component. Switching losses are only one piece of the puzzle, because every other component also has losses. The losses are transported away from the semiconductor in the shape of heat. If we can predict exactly how high the losses are, we can scale the heat sinks accordingly.

Adam Kuczmik: When you design an inverter, there are thousands of variables that can be modified. By increasing the switching frequency, the losses in the semiconductors may be increased, but the filter size can be reduced. If the switching frequency is reduced, you need a smaller heat sink, but you need larger filters. There are countless dependencies that make it difficult to find the optimum balance. If you know a piece of the puzzle like the switching losses, you can add them to the bigger picture and get closer to the optimal configuration.

RealIZM: What projects are you working on right now?

Stefan Hoffmann: We are doing a lot of work on the switching loss test chamber. It was developed and purchased as part of FMD, and it is quite innovative. Before we had it, measurements in industry or at semiconductor manufacturers were carried out by a double pulse, which means that the voltage and current curves are recorded directly above the semiconductor and multiplied by each other. That gives you the power loss, which correlates to the switching losses. This works quite well for silicon semiconductors…

RealIZM: … which are not used much anymore, right?

Adam Kuczmik: They are, in industry. Silicon semiconductors have become very cheap over the years and have just established themselves. The new kinds of semiconductors are better, but they are still quite unknown and accordingly more expensive and not used that much, yet. The double pulse measuring method works especially well with older semiconductors, because their switching speeds are as low as 80-100 nanoseconds or even more.

Stefan Hoffmann: For humans, that is, of course, unimaginably fast, but for our purposes, it is quite slow. The new semiconductors can switch in less than 10 nanoseconds, which makes it impossible to determine the switching losses in this direct way.

RealIZM: Are there many competitors working on this?

Stefan Hoffmann: At the moment, it is more of a research topic. When we presented the results of our test chamber at the ECPE (European Centre of Power Electronics) in October 2019, people were really very interested. It must be said that the people who were there tend to work in pre-development. They are not directly involved in the products, but they know something about the future direction of power electronics.

RealIZM: What kinds of products are we even talking about?

Adam Kuczmik: Ultimately, it is any product in which energy is converted. This can be anything from a mobile phone charger, a solar inverter, a drive inverter in a wind turbine. All in all, we are talking about all power ranges that can be imagined in electrical engineering.

RealIZM: And what exactly happens in these devices?

Stefan Hoffmann: You have electrical energy that has to be brought from one voltage to another. In a photovoltaics system, 50 Hertz alternating current must be generated from the direct current you get from the solar panels, so that you can feed it into the public grid. This is done with the help of a power electronics inverter, which is inserted between the solar panels and the grid, just to give you an example everybody is familiar with.

RealIZM: So are speaking a lot about solar power inverters. Is this your main focus?

Stefan Hoffmann: During my time at Fraunhofer IZM, we built a total of four solar inverters, but we definitely have several areas of focus. Most of our projects in the power electronics group are in the automotive field. We do all kinds of things, such as on-board chargers, drive inverters, or DC-DC converters. Some of our work ended up in Formula E racing cars, for example. We are currently working on an industrial converter that is connected to the 3-phase electrical network and supplies a motor. That could be for a cooling fan, for example, which could be very interesting from a sustainability point of view. A fan does not always have to run at full speed all the time, but can rather be operated as required, making it very energy efficient. Power electronics is one of the key technologies driving the energy revolution.

RealIZM: Can it help save costs on top of saving energy?

Stefan Hoffmann: Admittedly, our devices still tend to be on the expensive side. By making the components smaller, you get cheaper energy storage and housing. For solar inverters, this makes up a very large percentage of the total price, so you will have cost savings there. Unfortunately, still, the semiconductors are disproportionately more expensive.

RealIZM: Will this change in the near future?

Adam Kuczmik: It used to be the same story with silicon IGBTs: At the beginning, they were very expensive, but now you get them for a few cent or euro. This is still a new technology. Semiconductor and wafer production happens in small quantities, which keeps the technology more expensive. It will take a couple of years, but they will become cheaper.

Stefan Hoffmann: We are dealing with a lot of big names and medium-sized companies. Our suppliers include Bosch and Continental, and we are talking to Huawei, Renault, Mitsubishi, and practically all German automakers.

Measuring switching losses – This topic will be highlighted at this year’s PCIM digital days on 7th/8th of July. Be part of it and get in contact with us. For further information please follow this link.