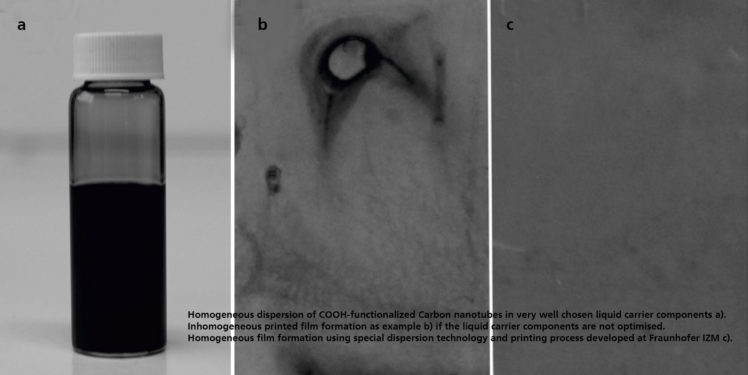 Materials science is one of the key disciplines for product development, where it promises a wide range of solutions for many pressing challenges, especially in novel technologies that are set to dominate the markets of the future. Carbon-based materials in particular are creating a buzz in research and industry with the unique properties they can contribute to flexible electronic devices. In his interview with RealIZM, Dr. Vitalij Scenev from Fraunhofer IZM speaks about the breakthrough of flexible electronics and how carbon-based nanotubes and graphene made it possible.

RealIZM: In layman’s terms: what is a difference between conventional and flexible electronics?

Flexible electronics is a new concept that appeared in Japan in the 1990s. It all started with flex tails for touchscreens, which, for example, connect the screen to the board in a mobile phone. The flex part was made of polyimide, which is very flexible and has a yellowish color.  On it, you had silkscreen-printed tails with a certain number of conductive traces. This flexible technology made it possible to display information on the screen.

Today’s flexible electronics are printed: the material indiumtinoxide (ITO), which is commonly used as a transparent electrode, is usually sputtered onto a carrier substrate, such as plastic polyethylene terephthalate or glass. Indiumtinoxide is currently cheap compared to alternative materials, and it exhibits the best reliability-to-price ratio. The problem with its use is that 99% of indium is currently mined in China, which gives the country a stranglehold on market prices.

Alternative options, although they are not widely studied, include carbon-based materials, such as carbon tubes and graphene. What makes them particularly interesting is the fact that, for example, a flexible smartphone could not be made with ITO, because it is an essentially solid substance with a deformation rate of only 1-2%. So, bending an ITO-based smartphone too much would break it. However, if we use carbon-based materials, we could produce a truly flexible smartphone, because carbon has much higher flexibility at the same conductivity.

RealIZM: Could you tell us more about the properties of carbon tubes? What are their pros and cons?

Vitalij Scenev: With carbon tubes, we typically distinguish between multi-walled and single-walled nanotubes.

As their name implies, single-walled nanotubes look like a graphite tube made from a single layer. They are long and very thin. In terms of thickness, they range between a few to, at most, tens of nanometers. The advantage of single-layered tubes is that you can print a thick layer that would fill all available space and gives you significantly better electrical conductivity than other materials. In addition, single-walled nanotubes can be semiconducting and have metallic properties at the same time. The disadvantage of this material is its price. Right now, it is significantly more expensive than, for example, multi-walled nanotubes.

Both materials have the same deformation characteristic and a high degree of flexibility.

Multi-walled nanotubes can be used for antistatic surfaces, for example for lab coats. For this case, special carbon fibers are used, which have very low conductivity, but enough for their purpose.

RealIZM: For which use cases could you pick carbon-based nanotubes?

Vitalij Scenev: If we talk about nanotubes in general, they can be very versatile for many different solutions. You can use them to make heat or electrically conductive pastes or inks, or you can mix them with silver particles to finetune the properties of a device to your liking. One example I can think of is a paste with silver ink for screen printing, where 70% of the composition is silver. We could get paste with the same characteristics, using less material by using carbon nanotubes. We would only need 1% nanotubes to obtain similar properties for the paste, depending on the application. This means, from the point of view of the consumption of materials – it would be much more environmentally friendly. In addition, it is worth noting that if we are talking about the strength of composite materials, the mechanical properties, e.g. elasticity, of the materials can also be significantly improved.

Let’s look at another example, not from electronics. There is currently a tendency to move from heavy metal structures to lightweight ones. Steel, for example, is very heavy, and if you add carbon-based materials, the resulting material will have much better mechanical properties, but it will also be significantly lighter. These materials are already actively used in airplanes, automotive industry, and construction.

RealIZM: What about graphene? What are its properties, and are there any advantages or disadvantages?

Vitalij Scenev: Graphene is an amazing and, at the same time, complex material. Graphene is electrically conductive and transparent. In addition, graphene is biocompatible, so it can be used in the medical field.

It can be exfoliated using the scotch tip method. This method was studied by Novoselov, for which he won the Nobel Prize in 2009. This technology produces an ideal graphene, but it is tiny – a few nanometers in size. Larger scales, like 10 by 10 cm, can be grown with the epitaxy method on silicon carbide, but it has a lot of defects and low conductivity.

Applications are currently limited to graphene chips, transistors, sensors; one day, it could be used for conductive electrodes.

If you compare graphene to single-walled nanotubes, graphene-based sensors will work much better and be much more sensitive. Graphene has an accuracy of a single molecule and can bend around a molecule, so its electronic structure is extremely changeable. For example, a gas detector on graphene will be much more receptive and sensitive than conventional sensors.

RealIZM: What can you tell us about your research at Fraunhofer IZM?

Vitalij Scenev: With our research at Fraunhofer IZM, we are trying to answer several questions: Which materials to use and for what purpose, how to obtain the desired properties, and how to set up production processes. Let us look at some of our projects:

For instance, we have developed threaded fibers with carbon nanotubes. With them, we can obtain a stronger structure with the electrical conductivity we want.

For printed electronics, we developed printable and electrically conductive inks with special characteristics. For example, we mixed nanotubes with a conductive polymer. This can massively improve the thermal characteristics of the conducting polymer and make it more robust.

In addition, we are currently working on a project where we are developing electrical conductive adhesives made of silver and nanotubes. With this adhesive, we want to place and fix LED components on PCBs with an ultra-strong and flexible bond. Technologies like these will be required, for instance, for smart textiles.

We are also working on a project to print electronic components onto flexible glass. As part of that project, we are planning to develop a completely new technology that can be used in locations exposed to environmental forces.

RealIZM: Would you dare a forecast about the future of carbon-based materials?

You cannot make such products with indium, because it is not pliable enough, whereas carbon-based nanotubes can be a good solution. 10 years ago, graphene became part of the hype cycle, followed by carbon nanotubes. There was a lot of attention given to these materials. But then China significantly reduced the prices for indium, and the mass interest in carbon-based materials disappeared. Still, we already have some companies which supply carbon-based Human-Machine-Interface (HMI) products, and we can see an increasing number of novel prototypes for smart devices, IoT, and hybrid electronics every single year. My guess is that it will take 10 to 20 years at most before carbon-based materials will be in general use.